Flow cytometry is a method to conduct a multiparameter analysis of cells suspended in liquid and passing through a laser beam. Analyses of human and other mammal sperm using this method have already been performed but its application for insect semen is still the subject of investigation. Semen isolated from honey bee Apis mellifera and red mason bee Osmia rufa was dyed using SYBR-14 and propidium iodide (PI). The fluorescence of the SYBR-14 stained cells was analyzed in a green fluorescence channel (FL-1), while the PI fluorescence was analyzed in a red fluorescence channel (FL-3). Living and dead cell populations were separated using a density dot plot and the percentage of each in the sample was calculated.

Results. In the image typical for spermatozoa counting beads were invisible (or covered under sperm image) – the method applied cannot be used in evaluation of bee sperm counts with flow cytometry 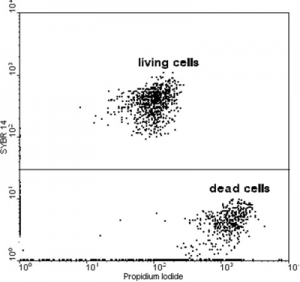 Living population also emitted fluorescence in the PI channel. Dual fluorescence (green and red) has previously been reported in honey bee studies based on microscope analyses. However, the difference we observed of PI fluorescence between populations considered as alive and dead was of at least one order of magnitude (Fig.1).

Our research has confirmed that the viability of honey bee semen can also be estimated using this method based on DNA fluorochromes typical of live and dead cells. The cells do not need to be counted since results are calculated based on their relative proportions. Flow cytometry is an automatic, time-saving and more precise method when compared with other available methods. It appears to solve the problems associated with distinguishing and counting double-stained cells.

The research needs to be continued to evaluate the dynamics of change in the transitory double-stained sperm population.